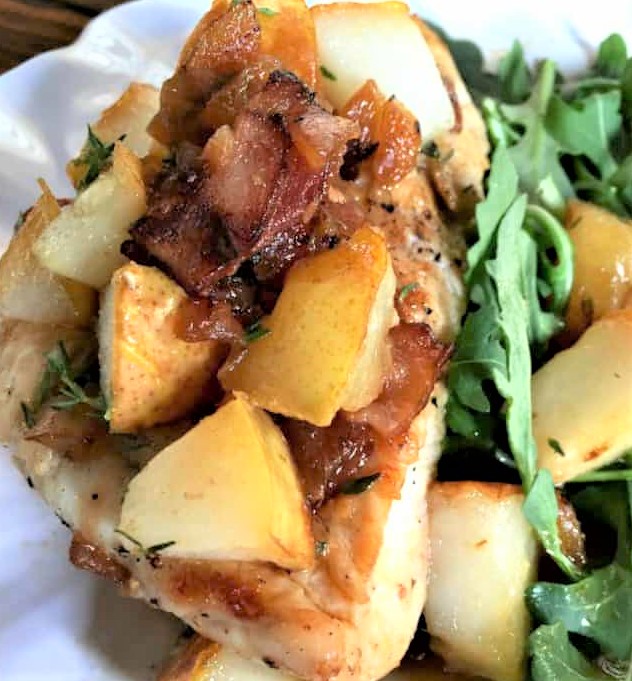 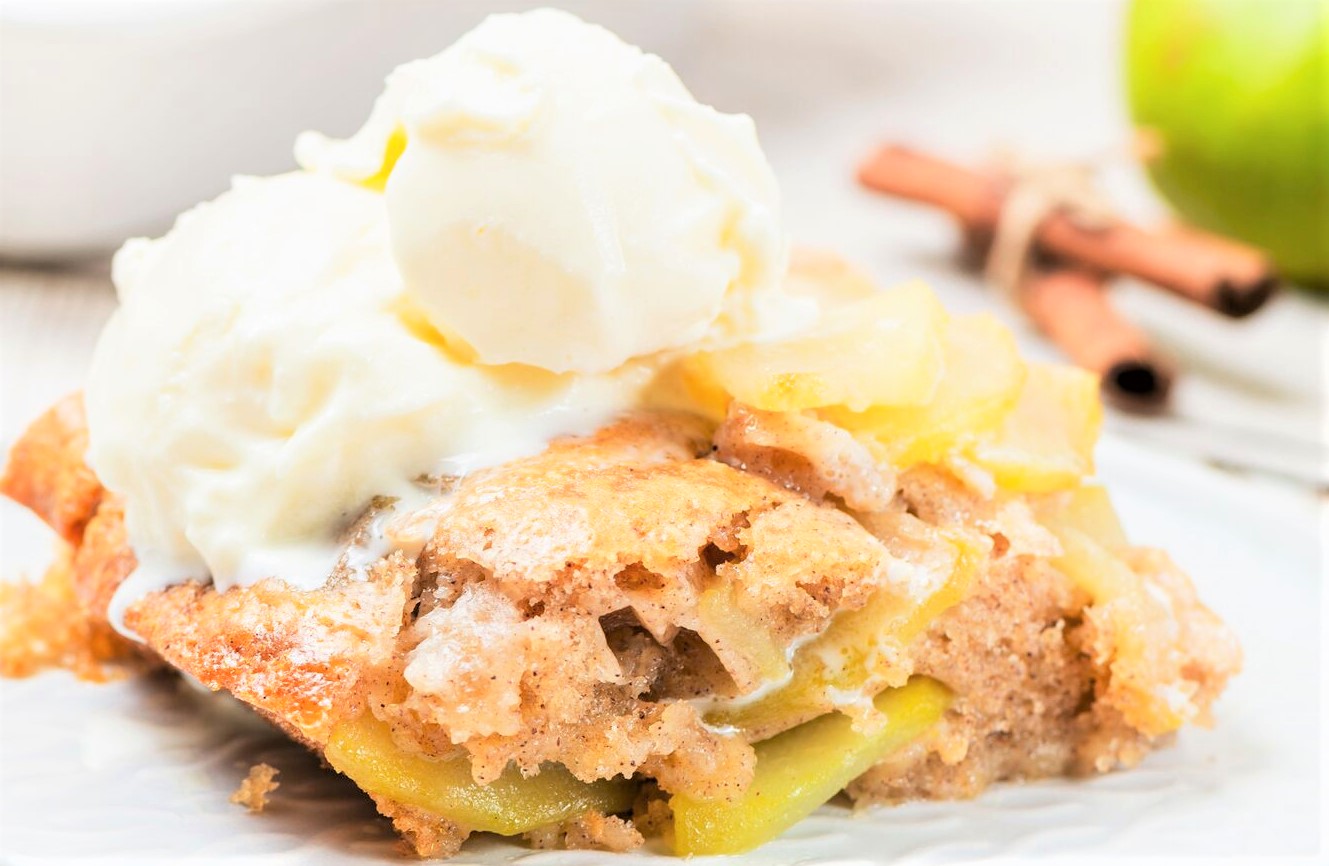 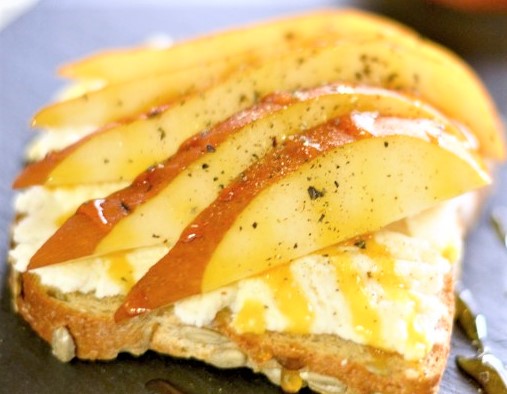 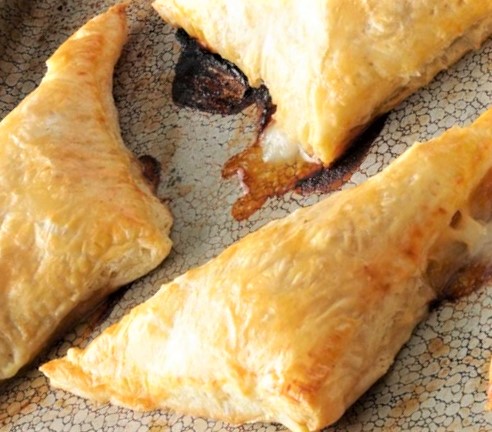 December is National Pear Month!  Dad and I share a love of pears and have for many years.  We had pear trees when we lived out by the lake and have a couple on the land we live on now.  I use to enjoy picking fresh pears we could eat straight off the tree.  We don’t do that much anymore, but we used to do it each year.  Worldwide there are about 3000 types of pears.  In the U.S. we only have about 15 varieties, D’Anjou, Bosc and Bartlett pear being the most common found in stores with the Bartlett pear being the most popular by far.  It’s my favorite too!

Pears are another great source of important nutrients.  One medium sized pear contains 6 grams of fiber and 1 gram of protein.  It also contains 12% Daily Recommended Intake (RDI) of Vitamin C, 16% RDI of Copper and 4% RDI of Potassium.  These fruits are also an excellent source of polyphenol antioxidants

The fiber in pears is soluble and insoluble fiber, which are essential for digestive health.  Soluble fibers feed the healthy bacteria in your gut. As such, they’re considered prebiotics, which are associated with healthy aging and improved immunity.  Insoluble fiber attracts water into your stool, making it softer and easier to pass with less strain on your bowel. Insoluble fiber can help promote bowel health and regularity. It also supports insulin sensitivity, and may help reduce your risk for diabetes.  Anthocyanins lend a ruby-red hue to some pears. These compounds may improve heart health and strengthen blood vessels.  Pears with green skin feature lutein and zeaxanthin, two compounds necessary to keep your vision sharp, especially as you age.

A couple of fun facts I want to sneak in.  Before tobacco was introduced in Europe, pear leaves were smoked!  The Chinese considered the pear to be a symbol of immortality.  The first pear tree was planted in the North America in 1620 in the Massachusetts Bay colony.  Today, most pears sold in the U.S. are grown on the west coast, in Washington, Oregon, and Northern California.  Although pears mature on the tree, they ripen best off the tree!  This is highly unusual as most fruits won’t ripen any further once they are picked.  Make your grocery list and meet me in the kitchen this weekend to cook with this delicious fruit!

Upgrade morning breakfast with this simple and oh so good toast!

4 slices of good-quality bread of your choice, each 1-inch thick

Quarter pear lengthwise and remove stem, core and seeds. Cut quarters into thin slices and set aside.  Toast bread slices and, once toasted, divide feta into four portions. Crumble one portion onto each slice of toast, and arrange pear slices in an overlapping fan-like pattern on top. Drizzle each slice with honey to taste, season with freshly ground black pepper and serve.

Preheat oven to 400°F. Unfold each sheet of puff pastry. Cut each into 4 squares. Spread 1-1/2 teaspoons mustard over each square to within 1/2 in. of edges. Brush egg over edges of pastry.  On 1 corner of each square, layer turkey, cheese, pear and onion. Fold opposite corner over filling, forming a triangle and press edges with a fork to seal. Transfer to ungreased baking sheets. Brush tops with remaining egg.  Bake 10-14 minutes or until golden brown. Serve warm.

Preheat oven to 400°F. Pat chicken dry with paper towels and cut breasts in half. Salt and pepper each piece.  Heat 2 tablespoons olive oil in pan over medium heat, adding chopped onions and bacon and sautéing for 3-4 minutes. Add wine and cook for another 2 minutes. Remove onions and bacon from the pan and set aside.  In the same pan, add a few tablespoons of olive oil and fry chicken breast on each side for 2 minutes, or until golden brown.  In a separate bowl, toss pears, honey, 1 tablespoon of freshly chopped thyme, and salt and pepper. Drizzle mixture with olive oil. Mix and set aside.  Place onion mixture on bottom of a roasting pan, with chicken breasts on top. Sprinkle with 1 tablespoon freshly chopped thyme, and place pan in preheated oven. Roast chicken for 20 minutes.  The last 10 minutes, remove chicken from oven and pour pear mixture with the juices over the top. Bake another 10 minutes.  Remove from oven and serve immediately on a bed of rice, mashed potatoes, or noodles. Garnish with fresh thyme.

Dessert doesn’t have to be elaborate with this simple recipe sure to satisfy your sweet tooth.

Preheat oven to 400°F. Halve pears and scoop out some of the center to fit oatmeal crumble. Brush insides of pears with 2 tablespoons melted butter and sprinkle with cinnamon sugar.  In a medium bowl, combine oats, almonds, brown sugar and cinnamon. Pour remaining melted butter into bowl and combine until fully coated.  Spoon into pear halves.  Bake until pears are soft, 35 to 40 minutes.  Top with a small scoop of vanilla ice cream and serve warm.

Preheat oven to 325°F.  Mix pears with 1/2 cup sugar and let stand.  Put butter in 2-quart baking dish and place in the oven until melted.  Combine all dry ingredients, including the remaining 1 cup of sugar. Mix well.  Whisk together milk and egg in a medium mixing bowl.  Slowly add dry ingredients to make a batter.  Pour over melted butter. Do not stir.  Spoon pears over batter. Do not stir.  Bake in preheated oven for 50 to 60 minutes, or until nicely browned and pears are tender. If topping appears to be over-browning, cover dish with foil and continue baking until pears are tender.  Remove cobbler from oven and set it on a rack to cool slightly.  Serve warm with a scoop of ice cream. Yum!