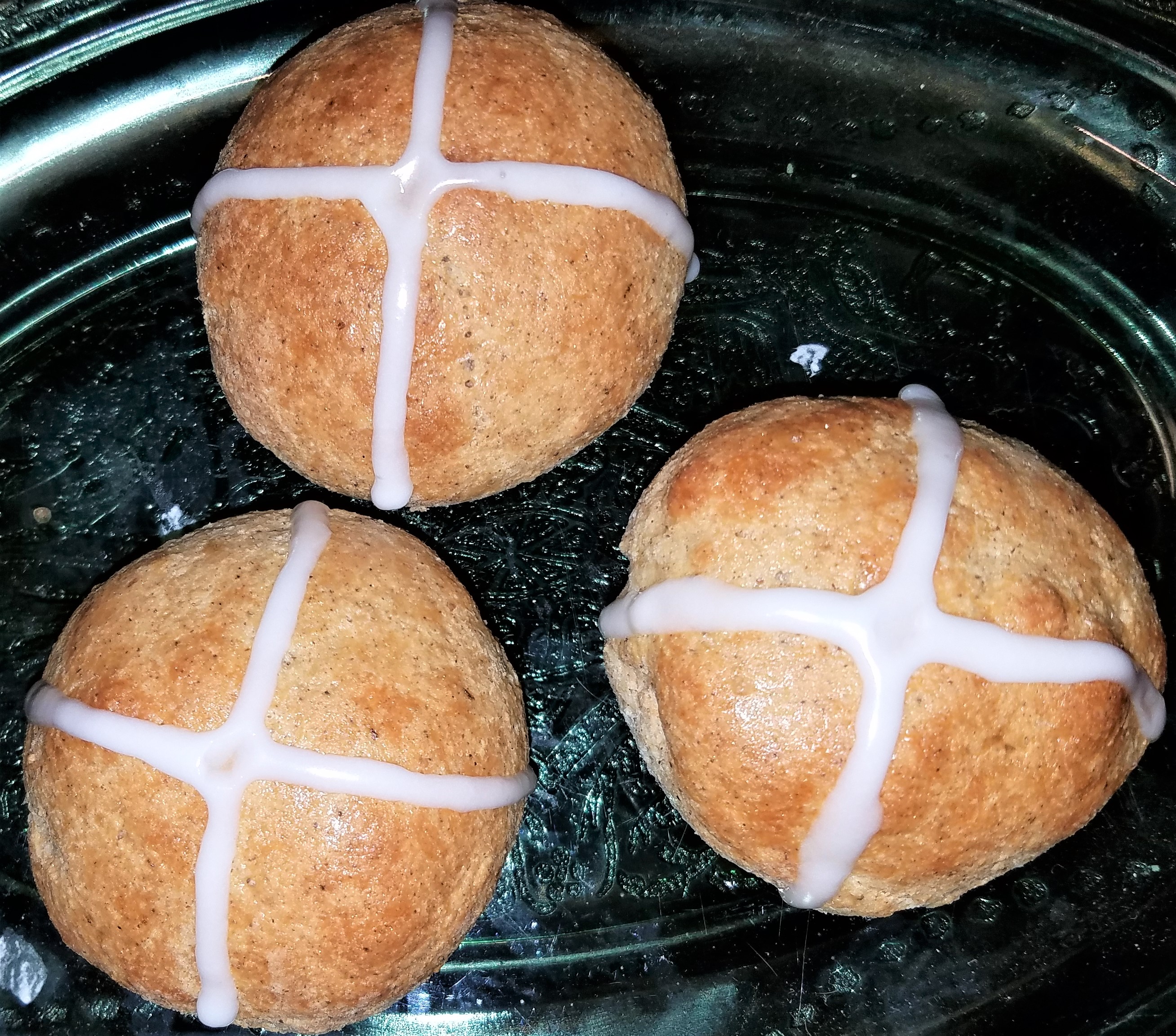 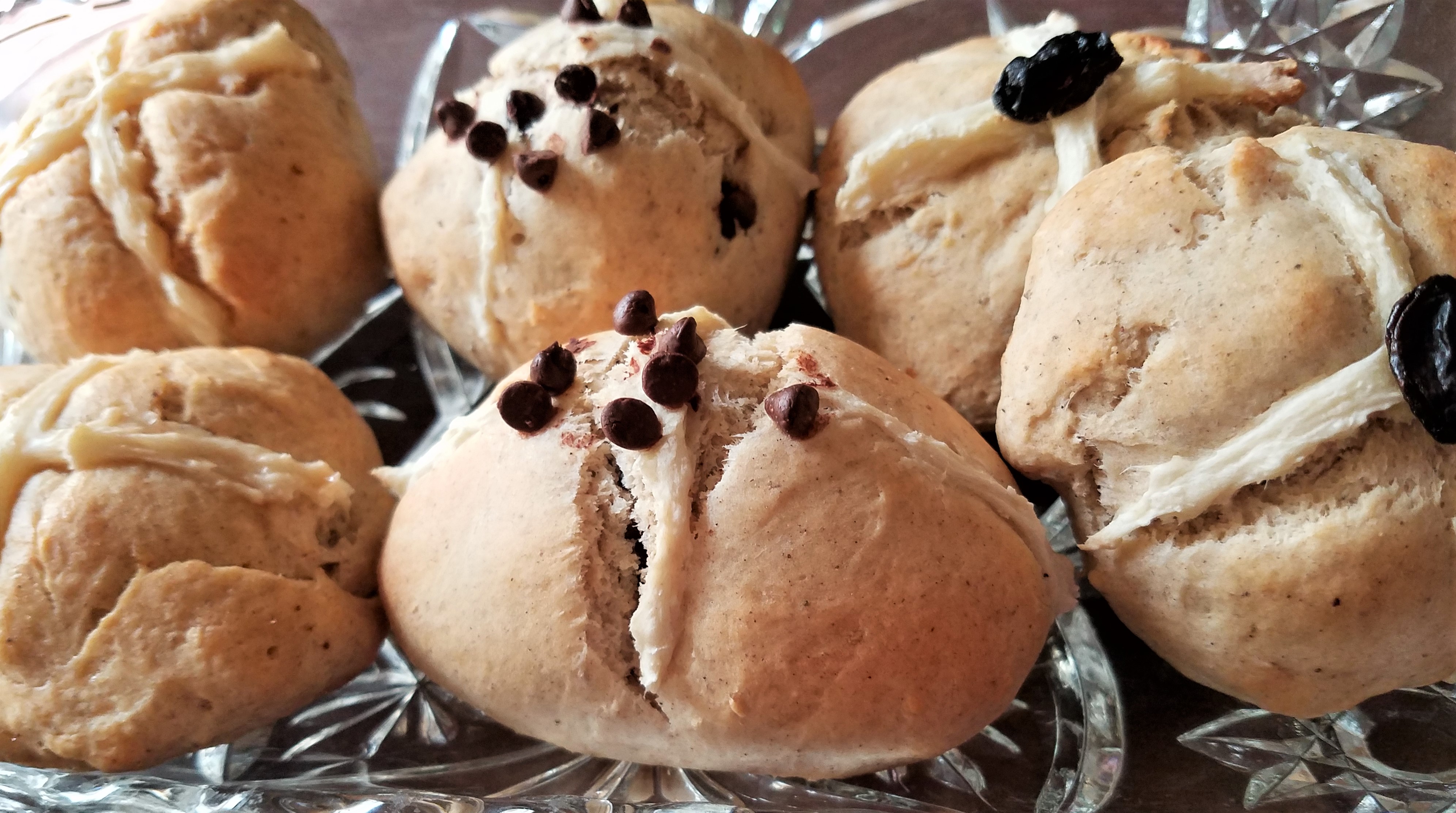 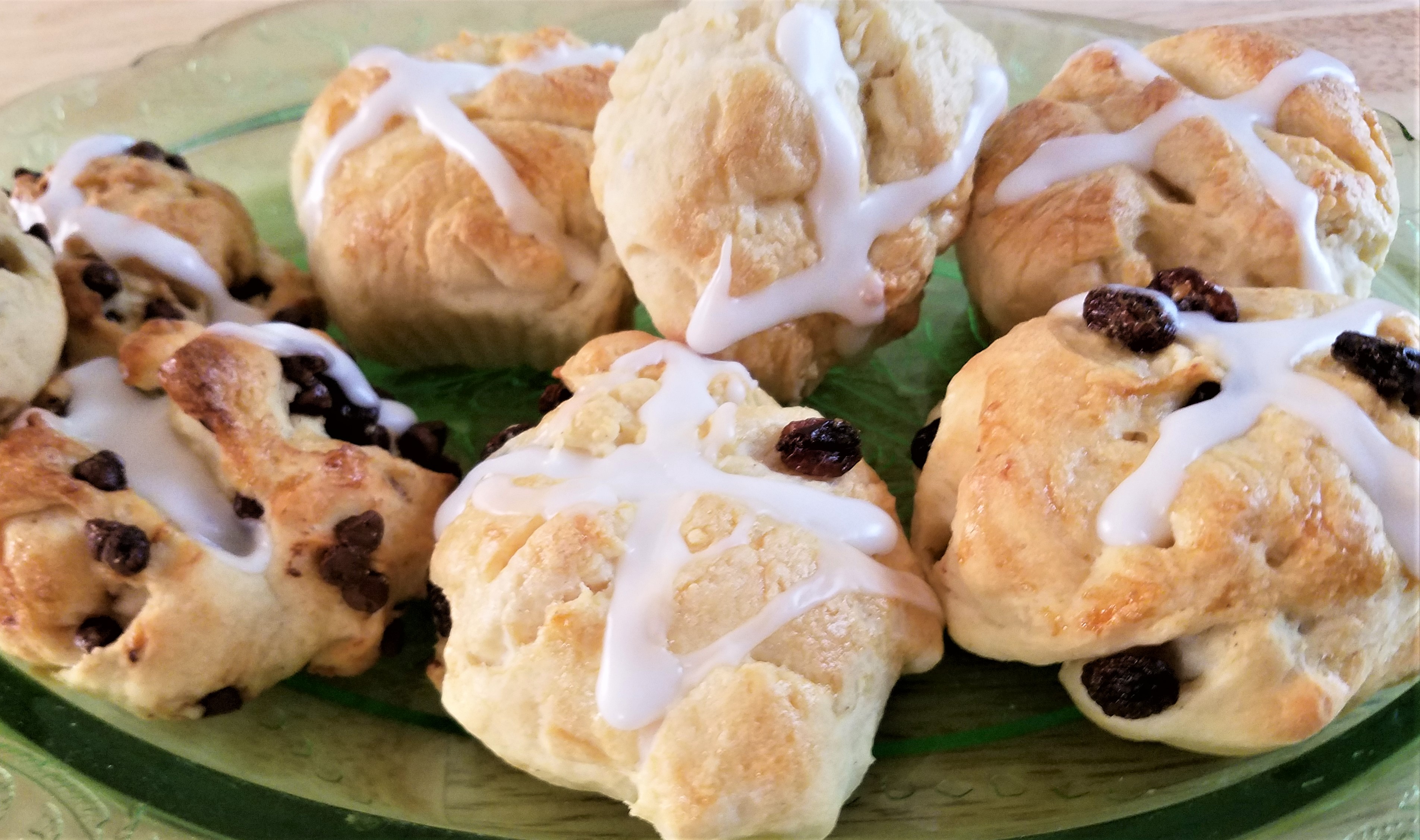 September 11 is National Hot Cross Buns Day!  This is a sweet, spiced bun adorned with a cross.  They are a quintessential Easter food but the National Day is in September.  Go figure.  There are many legends about these buns and even a few superstitions.  I am only going to discuss a few of the most popular of these.

Hot Cross Buns are inextricably linked to Easter and to Christianity. In reality, they probably have pre-Christian origins. ‘Cross Buns’ were baked to celebrate Eostre, a Germanic Goddess of Fertility, which Easter is said to be named from. Eostre was a voluptuous blonde maiden, always depicted surrounded by birds, bunnies and other baby animals, as well as spring flowers. Cross Buns were baked for the spring festival to celebrate this Goddess. The four quarters of the cross on top of each bun were said to represent the moon’s phases, while the cross itself symbolized rebirth after winter.

The Christian culture is known for taking the holidays of other beliefs, especially pagan and those in honor of other gods, and making them their own.  According to the story, an Anglican monk baked these same buns in honor of Good Friday. Over time, they gained popularity and eventually became a symbol of Easter weekend. In the Christian culture, Hot Cross Buns are eaten every Good Friday. They are symbolic of this significant day, when Jesus was crucified. The cross here represents the cross Christ died on. The spices in hot cross buns are said to represent the spices used to embalm Christ after his death.

Superstition are odd sometimes and these buns have their own.  They must be baked on Good Friday.  Buns baked on this day and hung from the rafters of a home would ward off evil spirits in the coming year. They're also said to prevent kitchen fires from breaking out, and ensure all breads baked that year will turn out perfectly delicious. Another talks of these buns protecting sailors from shipwreck, while off at sea. Yet another version mentions sharing the bun with a loved one guarantees friendship in the coming year, especially if you each get a half and eat it together.

This week’s recipes are a little more time consuming than normal so plan accordingly. I used 3 different versions so you can choose which you want to use.  Make your grocery list and meet me in the kitchen for Hot Cross Deliciousness!

In small bowl, dissolve yeast in warm milk. In large bowl, combine eggs, butter, sugar, salt, spices, yeast mixture and 3 cups flour.  Beat on medium speed until smooth. Stir in currants, raisins and enough remaining flour to form soft dough (dough will be sticky).  Turn onto floured surface and knead until dough is smooth and elastic, 6-8 minutes. Place in greased bowl, turning once to grease top. Cover and let rise in warm place until doubled, about 1 hour.  Divide and shape into 2 inch balls. Place 2 in. apart on parchment lined baking sheets. Using sharp knife, cut cross on top of each bun. Cover with kitchen towels. Let rise in warm place until doubled, 30-45 minutes. Preheat oven to 375°F.  In small bowl, whisk egg and water and brush over tops. Bake for 15-20 minutes or until golden brown. Remove from pans to wire racks to cool.  In small bowl, mix confectioners' sugar and enough milk to reach desired consistency. Pipe cross on top of each bun. Serve warm.

Preheat oven to 425°F and line baking sheet with parchment paper. In large bowl, combine flour, salt, raisins and spices and then cut in butter until it resembles crumbs. In small bowl, beat egg and 4 tablespoons sugar. Add egg mixture to flour mixture and just enough milk to form ball of soft dough.  Knead lightly on floured surface.  Divide dough into 2 inch balls and place on prepared baking sheet. In small cup, mix together ½ cup all-purpose flour and 1/3 cup water. Pour into plastic bag, cut corner off and pipe cross on top of each bun.  Bake for 12 to 15 minutes until golden brown.  Dissolve gelatin and 1 tablespoon of sugar in hot water. Remove buns from oven and brush lightly with glaze before serving.

Preheat oven to 350°F. Line baking sheet with parchment paper.  In small bowl, whisk together almond flour, coconut flour, baking powder, sweetener, cinnamon, nutmeg and cloves.  Set aside.  Add cream cheese to large microwave-safe bowl and cover with mozzarella (this will prevent cream cheese from overheating). Melt in microwave at 30 second intervals, stir cheese after each, until cheese is completely melted and uniform and resembles dough in appearance. This should only take 1-2 minutes total cooking time using cheeses straight from fridge (less time if you have softened cream cheese to room temperature). You can also melt cheeses on stovetop in double boiler.  Allow cheese dough to cool slightly (only a few minutes) so it is still warm to the touch but not hot.  Add cheese, 2 eggs and almond flour mixture into a food processor or mixer with dough blade attachment. Pulse/beat on high speed until dough is uniform. The dough will be sticky. Knead dough in bowl or lightly floured surface until cheese is incorporated and you have uniform dough ball. Divide dough into equal parts. Roll each ball between your palms until it forms smooth round ball. Place dough balls onto baking sheet, spaced 2 inches apart.  Add final egg to small bowl and whisk. Generously brush surface of rolls with egg wash.  Bake buns 20-23 minutes, or until rolls are golden brown.  Add milk and sweetener to small bowl and whisk until completely smooth. Add more milk if needed to thin icing until it reaches desired consistency. Once buns are cooled, pipe cross on top of each bun.