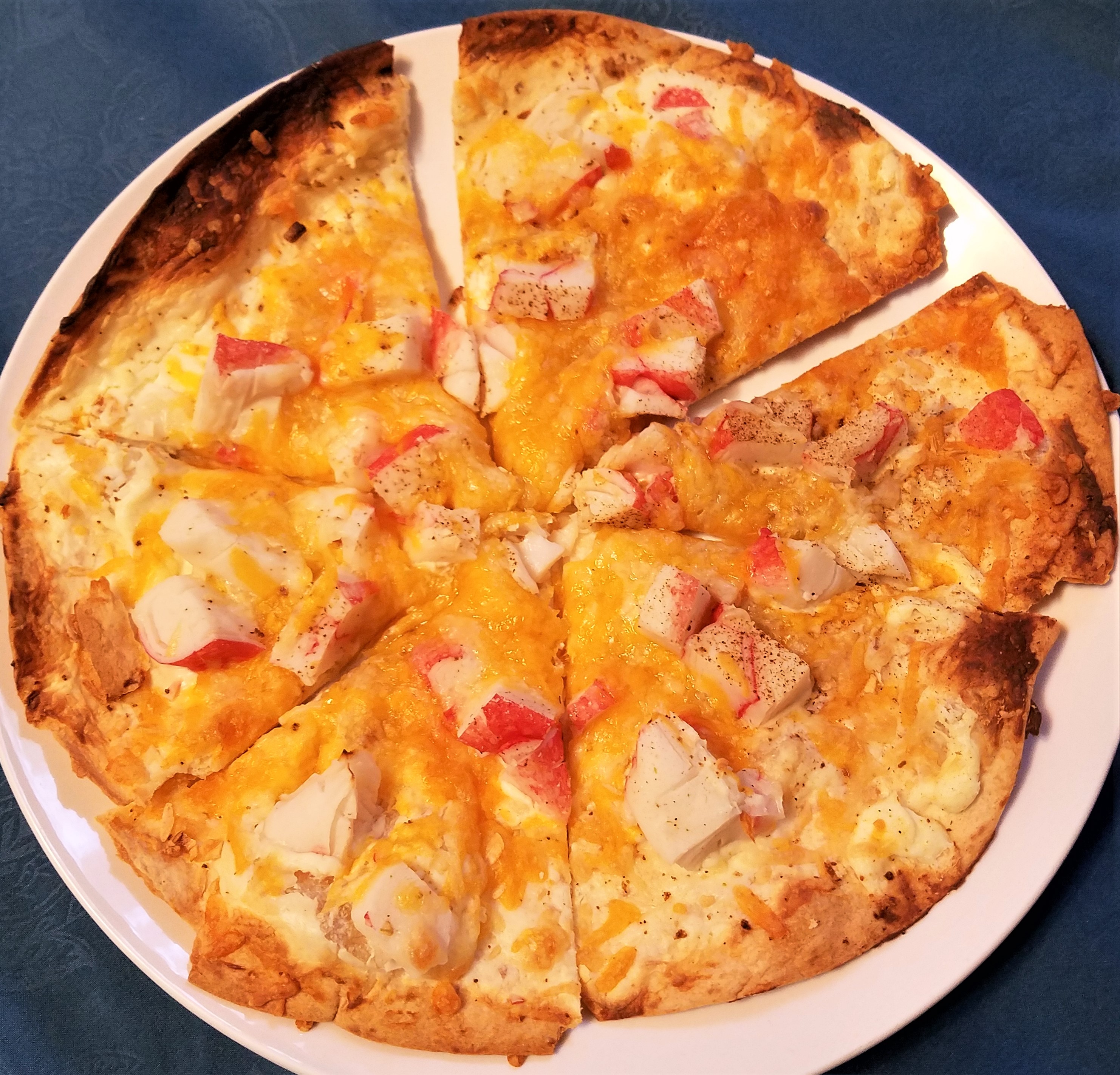 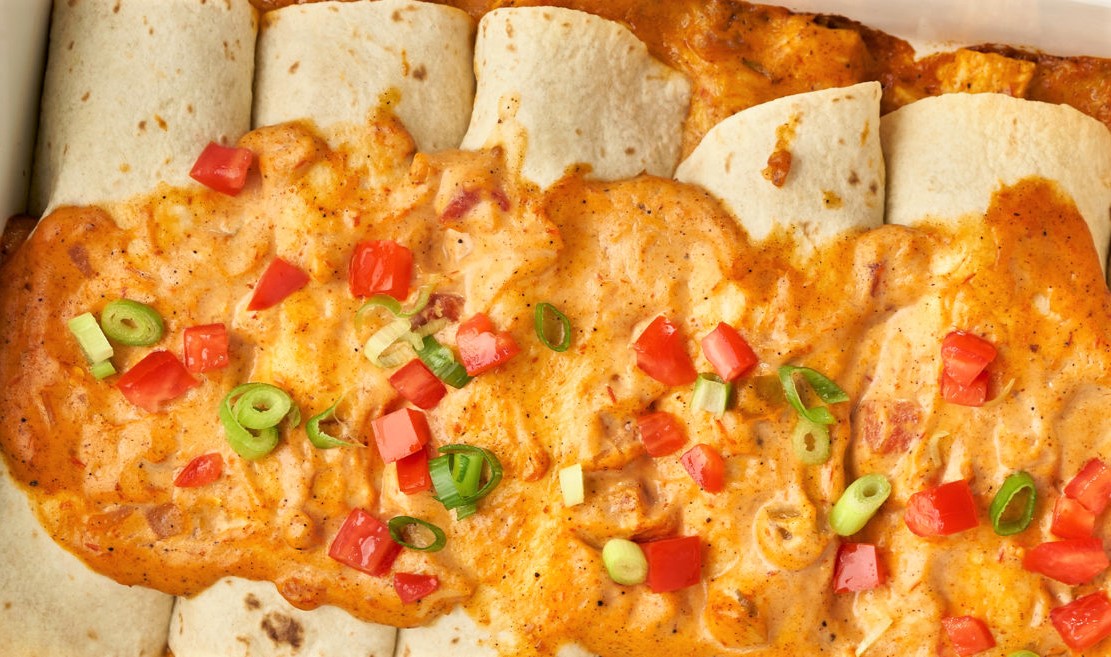 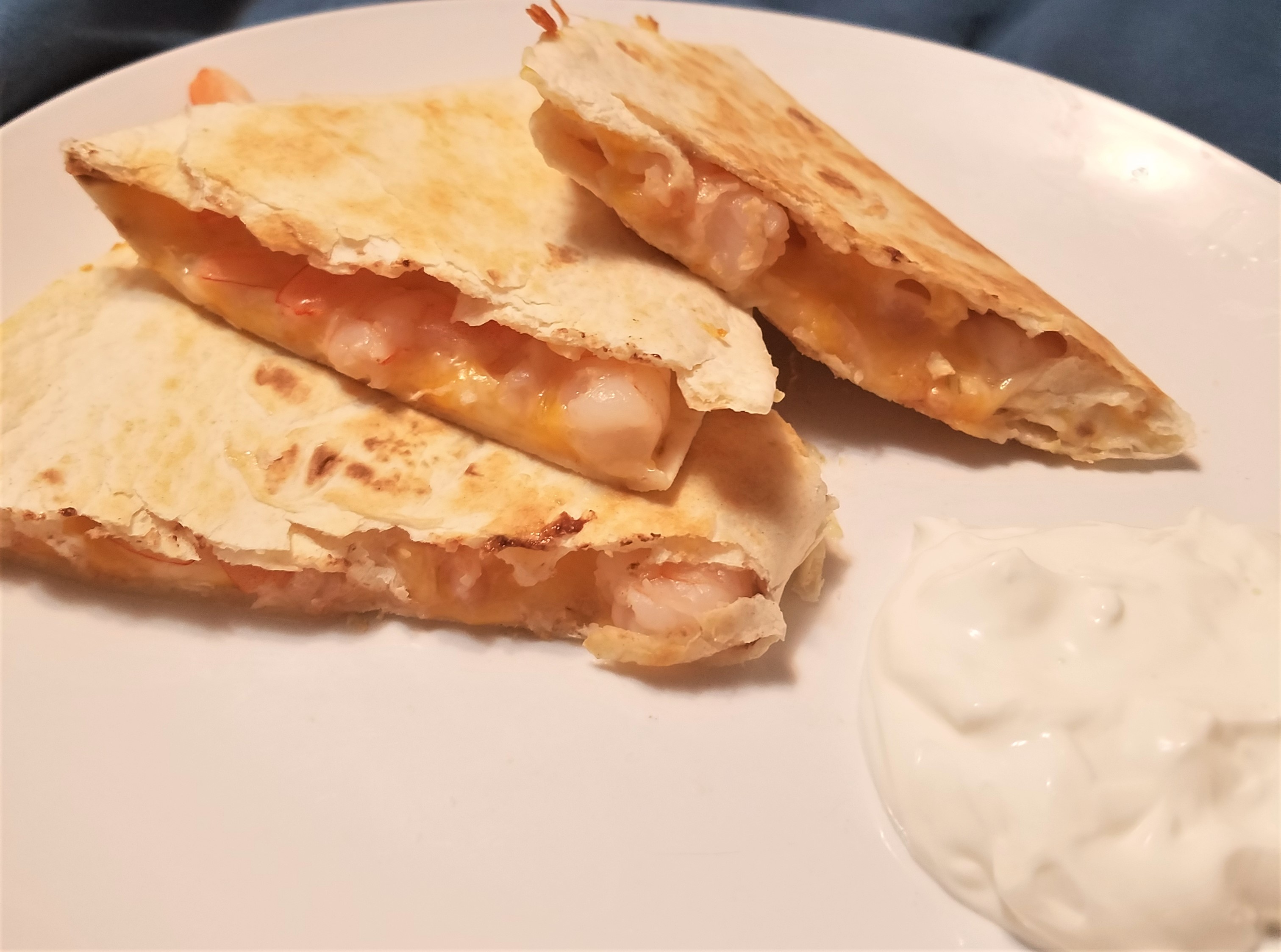 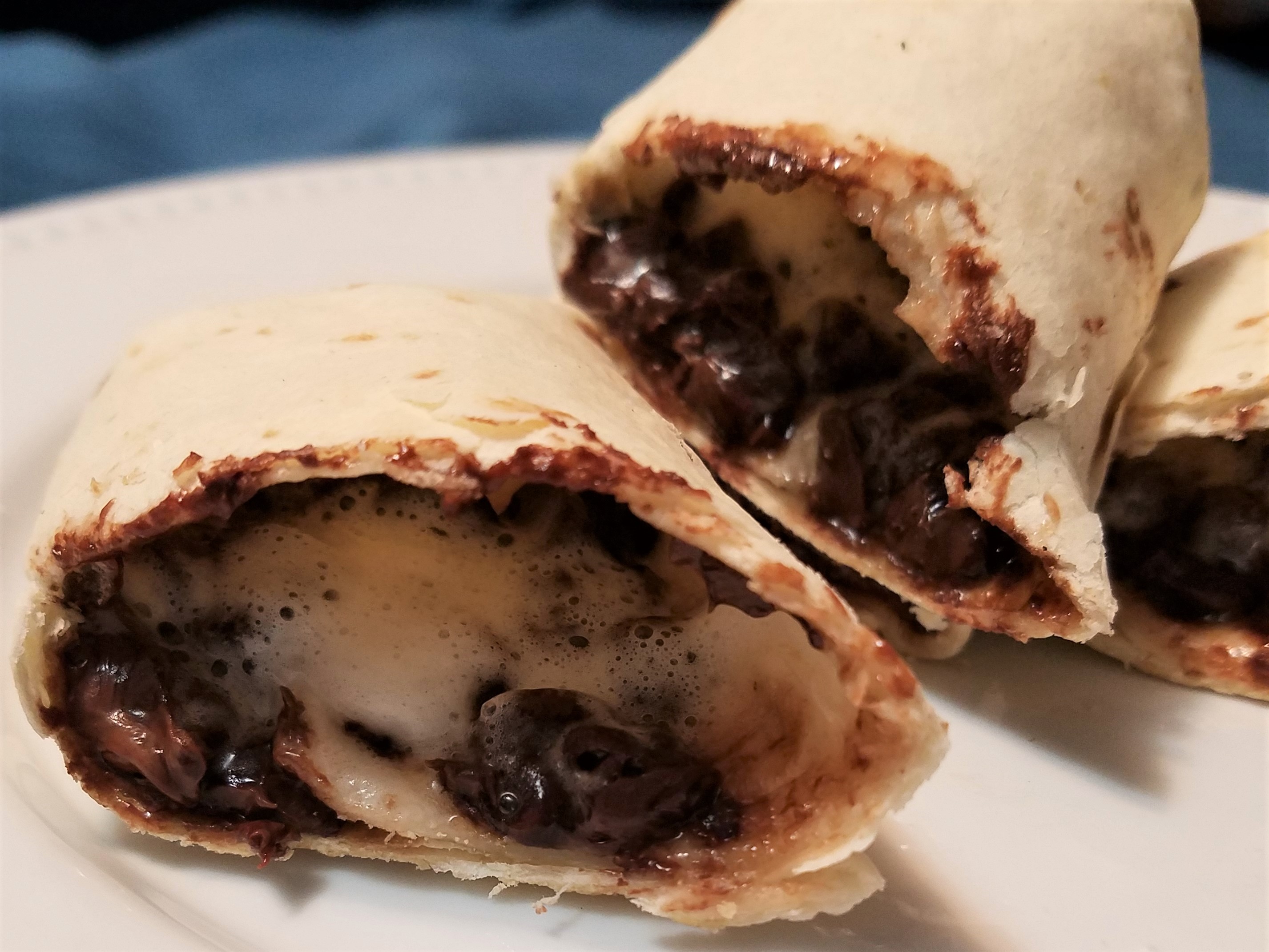 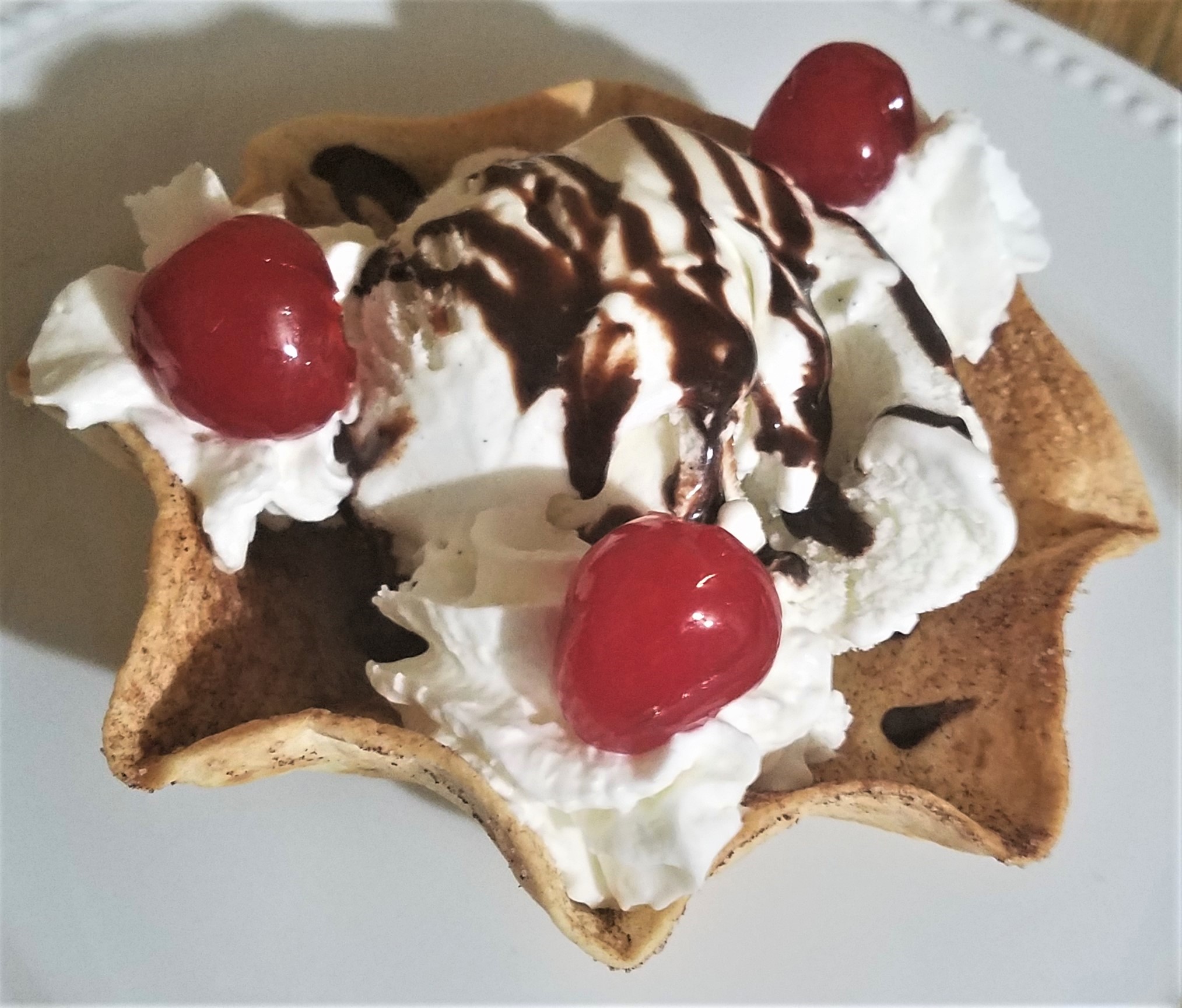 This week, I didn't have much time for cooking and preparing a column.  I had a cake to make for a friend so I was busy at the beginning of the week.  That left me with little time to actually get this column together.  So, I hit the pantry to see what I could find that would take little to no time and few ingredients AND ingredients I had on hand with no extra trip to the store.  I had made a recent trip to Tulsa and Sam’s so I had lots of tortillas.  Well, I often have things that I can throw on a tortilla from frozen chicken and shrimp to Nutella and bananas.  Tortillas also can’t hold much so they rarely use many ingredients. So, tortillas it is!

A tortilla is a thin, flat, circular unleavened flatbread originally made from maize, hominy meal, but now also from wheat flour or even vegetables. The word tortilla actually comes from the Spanish word “torta” which means round cake! These days, at the store, you can find corn tortillas in white, yellow or blue and flour tortillas as well as spinach or tomato, cheese tortillas and even almond flour tortillas for those who can't have gluten.

Corn tortillas were first made in what is now Mexico long before colonization came about, records have found at least as far back as 500 B.C.  Wheat tortillas were created in India.  Europeans visiting took the recipe back home.  The Europeans in turn introduced wheat and the recipe for tortillas to the Americas and they have been popular ever since.

The typical Mexican family of four consumes more than 2 pounds of tortillas each day.  The population of Mexico in 2019 was 127.6 million. That's a lot of tortillas! Mexico does consume more corn tortillas though than flour and often they are freshly made.

Approximately 120 million tortillas are consumed yearly in the United States and we don't even eat that many each day per person compared to Mexico! These are the second most popular baked product in the U.S., after white bread.

This week, I pulled out the tortillas and quickly made some things. I mean, if I am being honest, it was all in one night except the enchiladas so when I say quick, I mean it.  Tortillas are so versatile it’s just as easy to use them to make a quick wrap or pizza as it is to make a quick dessert.  Make your grocery list or just pull some ingredients out like I did and make do with what you have!  Meet me in the kitchen this week for quick and easy recipes that taste pretty good!

Heat oil in large skillet over medium heat.  Cook onion until translucent.  Add seasoning and shrimp.  Cook until shrimp are pink, 3-5 minutes.  Remove from skillet.  Place tortilla in hot skillet. Spoon shrimp filling and 1/2 cup Mexican cheese blend on one side of tortilla. Fold tortilla in half.  Repeat with second tortilla if it will fit comfortably in your skillet.  Cook until bottom of tortilla is lightly browned, about 5 minutes. Flip and cook other side until lightly browned, 3 to 5 minutes. Top with sour cream and salsa or other toppings as desired.

1 10.5oz can cream of chicken soup (I like the healthy request variety because of all the options available, it has the least amount of sodium)

1 cup sour cream (if you get an 8oz container of sour cream, you can use the whole container and not have to measure)

2-3 cups cooked chicken, shredded (you can also cube it if you prefer)

Tomato and onion, diced to taste for topping

Preheat oven to 350°F.  Spray sides and bottom of 9x13 inch baking dish with cooking spray.  Stir soup, sour cream, picante sauce and chili powder in a small bowl.  Take 1 cup of the mixture and place in another bowl.  Mix in chicken and stir until well combined.  (You can also add cheese and onion in this step if you prefer and make it all in one.  Most of my family likes cheese and onion that’s why I add these to each tortilla separately from the chicken mixture. This way, I control how much goes on and if there is someone who doesn’t want as much I can scale it back.)  The recipe calls for ¼ cup of the chicken mixture to be put down the middle of each tortilla.  I don’t measure mine.  I just take a spoon and spread it down the tortilla until it’s full as I like it.  Sometimes, I run out of the chicken mixture before I am done filling the pan.  If this happens, I take a spoonful of the sauce and mix it with the little bit of chicken I need to finish.  There is plenty of sauce to do this if needed and still cover the enchiladas when done. Top chicken mixture with onion and cheese to taste.  Roll tortilla up and place seam side down in baking dish. Repeat with remaining tortillas.  Pour remaining soup mixture over the enchiladas. Sprinkle with more shredded cheese.  Cover with aluminum foil.  Bake for 40 minutes or until heated through and cheese is melted.  Top with tomato, onion and sour cream as desired.

Preheat oven to 350°F.  Line baking sheet with parchment paper.  Lay tortillas out flat.  In center, draw a line of mini marshmallows like you were making a burrito, one handful per tortilla.  Top with 2 Tbsps. chocolate chips on each tortilla.  Sprinkle with graham cracker crumbs, to taste. Fold in both ends so nothing oozes out.  Roll tortillas around filling making sure to seal it well.  Lay on prepared baking sheet seam down.  Bake 7-10 minutes or until chocolate and marshmallows are melted.  It’s a fine balance.  Too much and the marshmallows evaporate, too little and the chocolate isn’t quite melted. You can easily add strawberries or bananas to this recipe to take it up a notch.  Yum!  So good!

Chocolate or caramel sauce (or both!)

Preheat oven to 375°F.  Melt butter.  Brush butter over both sides of each tortilla. Place tortilla in taco salad bowl maker or place in oven safe bowl to shape.  Combine sugar in cinnamon and lightly whisk.  Sprinkle cinnamon sugar over butter covered tortilla. Bake 12 minutes or until golden and crispy. Let cool for 2 minutes in bowl.  Remove from bowl and let cool completely.  Once cool, add one scoop of ice cream and top as desired.  Enjoy it all, including the bowl!