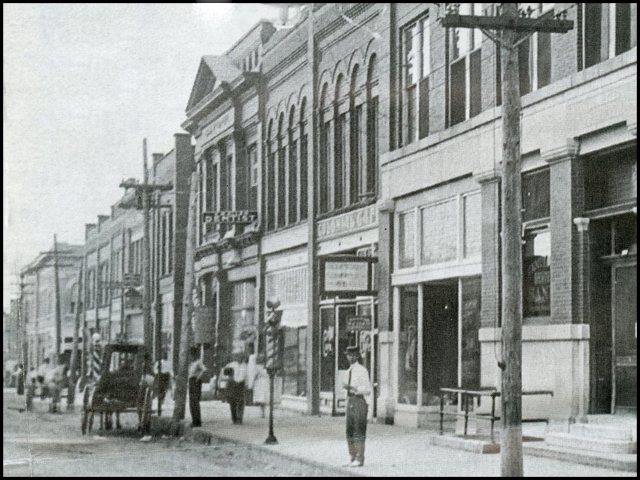 A Brief History of Okmulgee, Oklahoma

Okmulgee is a bustling trade and manufacturing town that has been the political and cultural center of the state's Muscogee (Creek) Indians for more than a century. Okmulgee is the Muscogee (Creek) word for "bubbling water." The tribe, following its removal from the Alabama-Georgia region to Indian Territory, 1829-36, established its capital at High Springs, about 20 miles southeast of present-day Okmulgee. In 1868, Okmulgee became the capital of the Muscogee (Creek) Nation, and in 1878, the tribal government was moved into the handsome, stone, two-story-with-cupola Creek Council House in the center of Okmulgee that is still the city's most striking and significant landmark.

When tribal government was dissolved in 1907, the structure became the Okmulgee County courthouse. In recent years it has been restored to house a museum of Native American murals, paintings and artifacts. In fact, the Muscogee (Creek) Nation Council still holds special meetings in the historic building.

As a modern city, Okmulgee's history began in 1899, when Muscogee (Creek) tribal lands were broken up into individual allotments, bringing an influx of white settlers. The first bank appeared in 1900, as did railroad service. The first significant oil discovery came in 1907, and the city's "golden decade" had begun. The opening of extensive coal deposits between Okmulgee and Henryetta kept the boom going through the 1920's. By 1930, Okmulgee's population reached almost 18,000.

The establishment of a World War II army hospital on the eastern edge of Okmulgee gave the city a significant post-war change in direction. With the hospital no longer needed, its 164-acre campus and about a hundred permanent buildings became the Oklahoma State Technical School. When established, Oklahoma State Technical School became one of only two such schools west of the Mississippi River, offering "learn by doing" instruction.

In the late teens and early 1920's, much of downtown Okmulgee's largest buildings were erected. Vaudeville houses, ornate churches and a seven-story office building showcased the downtown area. Renovations to downtown have restored the "early-day" atmosphere, as quaint shops provide visitors with a wide variety of antiques, gifts and clothing. Magnificent mansions still remain in Okmulgee, and many buildings downtown are now restored and renovated for a new generation of residents and visitors. Take off and enjoy the walking or driving tour - enjoy Okmulgee, one of Oklahoma's great historical cities.