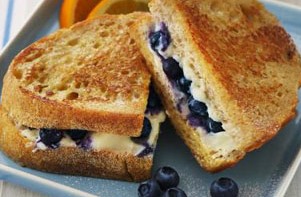 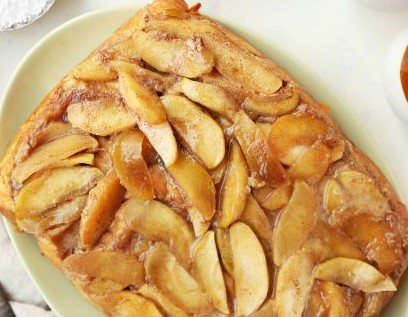 French Toast? Count me in!

Now, French toast originally was just milk and/or eggs, but I am a sucker for cinnamon so I add a little to my wash before frying.  This recipe is broken down for two servings but can easily be increased as needed for more people.

Beat egg, vanilla and cinnamon in shallow dish. Stir in milk.  Dip bread in egg mixture, turning to coat both sides evenly.  Cook bread slices on lightly greased nonstick griddle or in skillet on medium heat until browned on both sides.  Serve dusted with powdered sugar or drizzled with maple syrup or simply topped with fresh fruit and whipped cream.

Melt the butter in a large skillet and add apples.  Cook and stir for 5 minutes.  Add brown sugar, water, and cinnamon and continue to cook and stir for 10 minutes until apples are tender.  Spoon mixture into 9x13 baking dish sprayed with nonstick cooking spray.  Cover apples with bread slices, making sure to cover the entire surface.  Trim the bread to fit if you must.  Beat eggs until foamy, then beat in milk and vanilla.  Pour egg mixture over the bread slices.  Cover the dish and refrigerate overnight.  In the morning, remove the dish from the refrigerator and let it stand while oven is preheating to 375 F.  Bake uncovered for 35 minutes, or until bread is golden and firm.  Let sit 10 minutes before serving.  To serve on a platter, run a knife around the edges of the casserole, place platter on top of casserole, and carefully flip.  Make sure the platter you are using covers the casserole dish.  To serve individually, use a spatula to remove serving, place serving plate on top of serving and carefully flip so apple side is up.  Flipping is not something that has to be done.  It just makes for pretty presentation.

This one is a great way to take them on the go or just eat with your fingers!

Unsalted sweet cream butter, for coating skillet.  You can also use cooking spray.

Cut crusts from slices of white bread, and flatten bread with rolling pin.  Spread desired filling on 1 side of each slice of bread. You could combine cream cheese with fruit, or peanut butter and banana. I like a little cream cheese with honey and/or strawberries.  Nutella is a great option too!  There are so many choices. Use whatever flavor combination you would love! Tightly roll up the slice of bread. Continue for remaining slices.  In shallow dish, beat eggs and milk with fork. In another dish, mix sugar and cinnamon.  In 10-inch skillet, melt butter over medium heat to coat inside of skillet. Dip each roll into egg mixture, and place in skillet. Cook in batches of 3 or 4, turning until roll is browned. Dip into cinnamon sugar, and roll until completely covered. Serve immediately.

In a shallow bowl, beat eggs. Stir in milk and vanilla.  Dip 1 piece of bread in egg mixture, then flip to coat the other side.  Melt butter in a large skillet over medium heat. Once butter is melted, fry egg-soaked bread until browned, about 2-3 minutes per side. Remove from skillet, and drain on paper towel.  Repeat steps 2 and 3 until all bread is cooked. Make additional egg mixture if needed.  In bowl, stir together cream cheese and powdered sugar.  Spread cream cheese mixture on all 6 French toast slices. Spoon blueberries over cream cheese on 3 slices. Cover with remaining slices.  To serve, place sandwiches on plates and slice diagonally or in half. Garnish with additional blueberries and powdered sugar.

1 Tbsp butter, for the pan

Bacon, fried or baked, or other meat of your choice

Cheese of your choice

Whisk eggs, milk and salt in a large, shallow dish.  Dip slices of bread into the egg mixture on just one side.  Transfer onto a plate and prepare the sandwiches or place directly in pan and assemble in the pan one at a time. Put one cheese slice and bacon in between two soaked bread slices. Repeat to make other sandwiches.  Heat a pan over medium high heat and melt butter in it. Fry the sandwiches, slightly pressing them down over the lowest heat until they get golden on both sides; 3-4 minutes each side and serve.

Note: I like to use bacon or Canadian bacon for a quick breakfast sandwich with regular bread.  When using regular bread though, only make one at a time unless the bread is at least starting to go stale.  Otherwise, the bread will fall apart after soaking.  If you want to use something thicker like sausage patties or ham steak, feel free to use the thicker bread to make it a more even bread to meat ratio.

This is not traditional French toast but it is prepared the same with an egg/milk wash so it still counts. Plus it’s delicious!  Feel free to use different meats or cheeses or even different condiments.  Make it your own!

1 slice Swiss cheese or cheese of your choice

Spread bread with Miracle Whip and mustard. I use Miracle Whip on one slice of bread and mustard on the other or sometimes I leave off the mustard.  Place cheese on bread and alternate chicken and turkey slices.  Then, top with pepper jack.  Beat egg and milk in a small bowl. Coat the sandwich with the egg and milk mixture. Heat a greased skillet over medium heat, brown the sandwich on both sides. Serve hot.