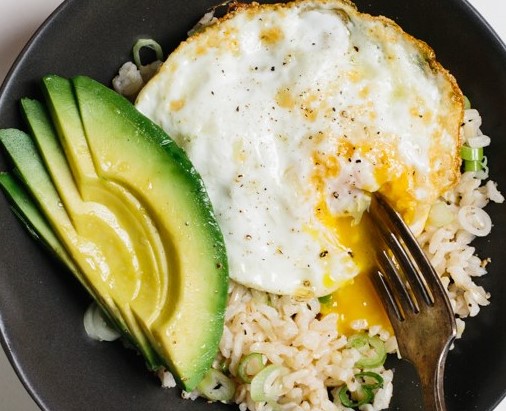 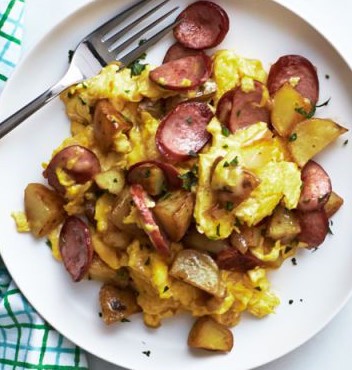 Meals That Wont Break The Bank

Salt and pepper, to taste

Preheat oven to 350°F. Divide waffles between two large baking sheets and bake until crispy, 7 to 10 minutes. Remove from heat and let cool slightly before cutting into big chunks.  In a large bowl, whisk together eggs, milk, maple syrup, and butter. Season with salt and pepper.  In a large casserole dish, combine waffles and breaded chicken, then pour the egg mixture on top. Sprinkle pepper on top. Bake until the waffles are crispy, about 45 minutes.  Serve warm with more maple syrup.

Rice Bowl with Egg and Avocado

Go with a brown rice for this dish instead of white.  Brown rice is full of nutrients and fiber that is missing in its white counterpart.  This way you have a nutrient packed and filling lunch instead of being hungry again in an hour.

Hot sauce or salsa for serving, if desired (I like using Fennie’s Homemade Salsa from Rick & Fran’s Country Kitchen out at the Flea Market on Hwy 75 just south of town.)

Mix scallions, rice and vinegar in a small bowl.  Heat oil in a nonstick skillet over medium-high heat. Crack eggs into skillet and season with salt and pepper to taste. Cook until whites are set around the edges, about 1 minute. Flip eggs and cook to desired doneness, about 30 seconds for a runny yolk. Divide rice among bowls; top with eggs, avocado, and hot sauce.

Preheat oven to 375°F.  Brown the ground beef in a large skillet over medium-high heat. Drain excess fat. Stir in the onion, green bell pepper, tomatoes, water, rice, chile sauce, brown sugar, cumin, Worcestershire sauce and salt and pepper to taste.  Simmer for about 30 minutes, stirring occasionally. Then transfer to a 2-quart casserole dish. Press down firmly and sprinkle with the shredded Cheddar cheese.  Bake for 10 to 15 minutes, or until cheese is melted and bubbly.

8 oz. Yukon gold potatoes (1-2 potatoes depending on size will give you 8oz)

1 cup pepper Jack cheese, more or less to taste (if you don’t like pepper jack, feel free to substitute as you wis)

In a large bowl, whisk together the eggs, 1 Tbsp milk and ½ tsp pepper.  Heat 2 Tbsps olive oil in a 10-inch non-stick skillet over medium heat. Add the potatoes and season to taste.  Cook, covered, stirring occasionally, for 8 minutes. Add the onion and cook, covered, until the potatoes are golden brown and tender, 4 to 5 minutes more.  Add the kielbasa and cook, uncovered, tossing occasionally, until golden brown, about 5 minutes; transfer the potato mixture to a plate.  Add the egg mixture to the skillet and cook, stirring every few seconds with a rubber spatula, to desired doneness, 2 to 3 minutes for medium-soft eggs. Fold in the potato mixture and cheese.

Preheat the oven to 350°F.  Rinse the chicken and pat it dry. In a small bowl, combine the onion powder, salt, paprika, and pepper.  Drizzle the chicken with 1 tsp of the olive oil and use your hands to rub it into the chicken. Sprinkle the seasoning mixture over the chicken evenly and then massage it in.  Heat a large Dutch oven or oven proof skillet with an oven proof lid over medium heat. If you have no oven proof skillet then you can use a large skillet.  Add the remaining 2 tsps of olive oil. Working in batches if necessary, cook the chicken until it is browned.  While the chicken is searing, whisk together the honey, balsamic vinegar, BBQ sauce, water and minced garlic. Add the sauce to the chicken in the Dutch oven once all the chicken has been browned. Toss the chicken in the sauce, then put the lid on the pan and transfer to the oven.  If you don’t have an oven safe skillet or Dutch oven, you can transfer this to a casserole dish and cover with aluminum foil to bake.  Bake the chicken for 20 minutes, then rotate the chicken and baste with the sauce. Bake an additional 20 minutes.  When the chicken is cooked, remove chicken and keep warm. Place the Dutch oven on the stove over high heat and bring to a boil.  If no Dutch oven, return the juices to the original skillet.  Simmer until the sauce is thick and glazy.  Brush the chicken with the reduced sauce before serving.

I love a baked potato for dinner.  Baked potatoes from the microwave are convenient and can be done in 5-10 minutes, but I love the taste of a potato out of the oven.  I often use whatever meat I have left over from a previous dinner to top it as well.  This uses meat I have on hand while giving me a new meal.  Some of my favorites are taco meat and BBQ chicken.

Large bakers potatoes, how many will depend on how many you are feeding (You can also use a sweet potato for a different taste)

Shredded chicken, brisket or ground beef, etc. Use what you like or what you have on hand.

Other toppings as desired

Preheat oven to 450°F.  Wash potatoes well.  Use a small scrub brush to make sure all the dirt is off.  Puncture each potato 2-3 times on each side.  Wrap in aluminum foil.  Bake in oven for about an hour.  Using an oven mitt, when you think the potatoes are done, slightly squeeze the potato.  It should have some give to it.  If it still feels hard, give it another 10 minutes or so.  Remove from oven when done.  Top with butter, sour cream, shredded cheese, green onion and other toppings as desired.