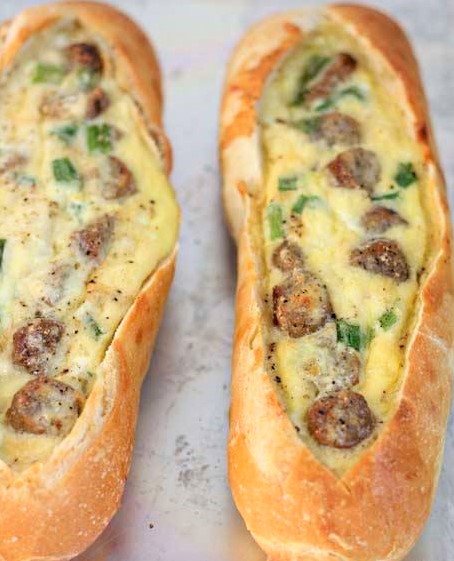 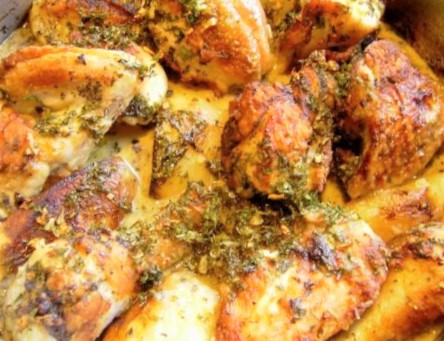 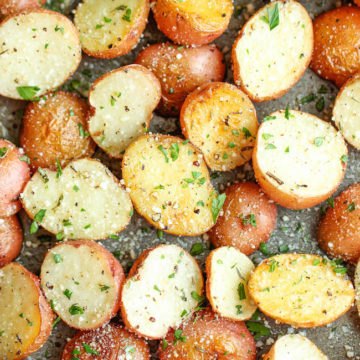 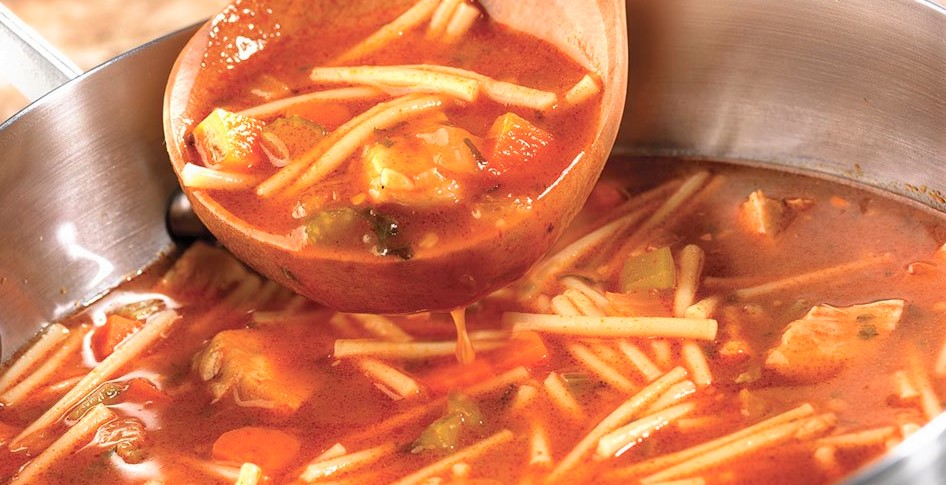 Hoagie rolls or other small loaves

½ cup butter, more or less as needed to cover bread

Vegetables as desired for an omelet, chopped - try peppers, mushrooms and/or onions

Heat oven to 350°F.  Cover baking sheet with parchment paper.  Take each loaf and cut into the top and remove a section of bread to make your boat.  Spread butter on each boat.  Sprinkle each piece with garlic powder.  I like to use a mix of garlic powder and taco seasoning.  Bake for 15-20 minutes or until toasted.  Cook bacon or sausage in large skillet according to package directions.  If making sausage, break it up like you would ground beef.  Place meat on paper towel lined plate to remove extra grease.  Break bacon into large pieces when cooled. Reserve a tablespoon of grease and discard the rest.  Cook eggs in remaining cooking grease.  As eggs start to set, add milk.  This will keep the eggs from drying out once you put them back in the oven.  Also, add any vegetables while cooking eggs.  I make mine more like scrambled eggs with veggies, but if you would rather have it like an omelet, feel free to cook it how you want.  After eggs have cooked through and are no longer runny, evenly distribute eggs between bread.  Lightly sprinkle with cheese.  Top with meat and any other toppings of choice like avocado or tomatoes.  Top with more cheese and return to oven.  Bake for 3-5 minutes more until cheese is melted.

Preheat oven to 400°F. Lightly oil a baking sheet or coat with nonstick spray.  Place potatoes in a single layer onto prepared baking sheet. Add olive oil, garlic, thyme, oregano, basil and Parmesan and season with salt and pepper, to taste. Gently toss to combine.  Place into oven and bake for 25-30 minutes, or until golden brown and crisp. Stir in butter until melted, about 1 minute.  Serve immediately, garnished with parsley, if desired.

Season pork as desired.  Stir rosemary, parsley, thyme and garlic in a small bowl. Cut small slits into surface of pork with a knife. Stuff herb mixture into slits. Place pork into roasting pan.  Bake at 350°F for 1 hour or until pork is cooked through. Remove pork from pan and let stand for 10 minutes.  Stir soup and water in roasting pan. Cook and stir over medium heat until mixture is hot and bubbling, scraping up browned bits from bottom of the pan. Serve pork with gravy.

Recipe adapted from Campbell’s Potluck for all Occasions cookbook

Heat 1 tablespoon oil in a 6-quart saucepot over medium-high heat. Add chicken and cook until browned, stirring often. Remove chicken from saucepot.  Add remaining oil to saucepot and heat over medium heat. Add onion, carrots and garlic and cook for 2 minutes.  Stir broth, soup and 1 cup water in saucepot and heat to a boil. Stir in spaghetti. Cook for 10 minutes or until spaghetti is tender. Stir in chicken and cook until chicken is heated through.